Archive for the ‘Cue’ Category

A Mitzvah For My Mom 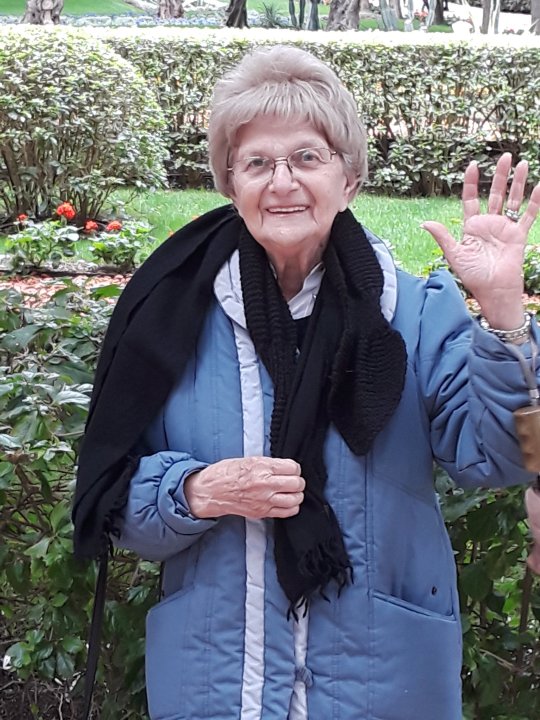 I kept getting calls from Israel from my Mom that my Dad who is 86 got pnemonia fell down, hitting his head. My lady friend Carol told me that he should be wearing a medical helmet just in case he falls down again. He was doing so well when my orthodox brother-in law, whose father recently died was there. But when he returned home to New Jersey, my Dad was back in Hadassah hospital and he died in the middle of the night right after we came home from seeing the movie Medea’s Family Funeral which wasn’t that funny or good.

I didn’t really want to see it but my lady friend did. I felt it might be bad luck and it really was.

My dad was a pioneer. In the air force, he was a ham radio operator who worked with Morris code. When I was young, he had his own mobile TV repair business. When I took classes in cyber security, I invited him and he absorbed the lecture like a sponge and formed his own Cyber Security company that charged a monthly fee. He always had great ideas but they just didn’t make it to market the right way.

I don’t want to be that way, but I guess I’m like that too.

I was going to go to back Israel to spend Purim with my family anyway since I got a Discover credit card, but now I would unfortunately have to attend my father’s funeral, or so I thought. Actually neither my sister or I were allowed to because the rabbi wanted him buried traditionally within 24 hours and my mother agreed to this. So we were told to come and sit shiva, which is a ritualized mourning party where friends and family visit and bring food over to share memories. Not being able to even attend the funeral added to the upset feelings I felt.

I scheduled a flight on British Airways which seemed like a very safe airline at the time. Then I heard the news while I was packing that a package exploded at the Airport in England where I was transferring to Tel Aviv. Great. Now I might die too. I was scared as hell to get on that flight. I had enough room on the flight to fall asleep but a couple stole the extra seats. When we went over Colorado, there must have been a storm brewing because the turbulence was so jarring, it knocked over my free beer. This is not the first time I almost crash landed in Colorado. Maybe that’s why it’s called the Rockies.

Anyway I survived and had to deal with all the ques in Britain. After a free bus that took me to the wrong place and I had to walk in the rain, here’s the hotel I stayed in near the airport. 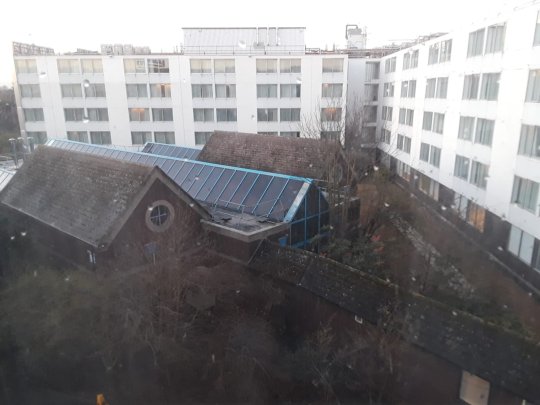 I had to line up or as they say “cue” up just to get the room I already reserved.

Dinner was pretty good. A seafood pasta. But I didn’t know anybody there so I knew I had to move on the next day. The weird thing about the rooms was that there were two beds and one was super hard and the other was super soft. I chose the soft one and there were red strings hanging from the ceiling near the bed and in the bathroom. I asked about these and a hotel staff member said they were for disabled people.

I tried to calculate what time I should get up to sleep as much as could, even with my jet lag. But somehow I woke up late and got it wrong. I showered, packed and took the elevator down. I asked for a taxi and then I realized I forgot my suit! I panicked until I saw a room attendant that I asked to help me. He ran up to the room and promptly delivered it to me. I felt blessed, gave him a nice tip and the cab driver was still patiently waiting for me. I felt like I still had time to catch my flight but the cab driver thought it would be a close call. Thank G-d he knew where my airport gate was. As a matter of fact, he was an expert. He charged a little more but he got me to the airport and there seemed to be enough time so it was worth it. Besides, since the price of a British pound was currently $1.40, Britain was too expensive for me no matter how much I wanted to visit the places where British invasion rock stars had lived. I went through security , even though they tried to stop me because I only was a half hour early.

I prayed while they checked if I could still get on the flight. It would be very embarrassing for my family if I couldn’t sit shiva on time. They told me I’d have to run but I could still make it if I go through security and get on the train to the gate to catch my flight. I went through security as fast as possible and ran like hell to catch the train even though I didn’t reall know where it was. I had to ask people while I was running. But I found the train and then I was running to the elevator to the gate.

I met a disabled person in a wheelchair who was going my way and said we had plenty of time. I didn’t take it for granted after I got off the elevator though that calmed me down and then I felt like I could make it on time. I got in my seat on the plane and felt relieved.

I was very hungry but willing to wait till the staff served breakfast. I had to wait a few hours. Then I saw a great movie called Instant Family about a couple that adopted teenagers. It starred Mark Walberg and was pretty touching and funny. The story emphasized the struggle that orphan teenagers have to be adopted. So many people want to give birth to children or adopt babies but not teenage orphans. Before we before we reached Tel Aviv, the stewardess offered me another free beer.

We had a fairly smooth landing where I could see Hebrew letters from the air near the ocean but in the airport when I went to pick up the luggage, it wasn’t there. I spoke to two airline representatives about this and they finally told me they would deliver it to my Mom’s house.

I called my brother in law who was picking me up outside the airport and told him I was here.

He arrived about 20 minutes later and couldn’t figure out how to use the GPS to get us to my Mom’s house. and it was getting dark. I started freaking out.

But my brother in law found a beautiful Yemenite synagogue in the country for the evening prayers since he is a religious Jew.

So I met the family downstairs that was hosting me. I found out I’d be staying in a bomb shelter room Here’s a picture of it.