The www.https://www.portofsandiego.org/projects/portside-pier just after it opened.

I had been following the progress of this pier almost every week for over a year now. A few major restaurants like   http://ketchgrillandtaps.com/ http://www.brigantine.com/and https://www.miguels-cocina.com/ were supposed to open locations here on the pier. I read a sign that said it was supposed to open in March 2020. Then came the coronavirus. And a lot of delays. I kept checking back, taking a weekly pleasant walk around the San Diego Embarcadero on Mission Bay, hoping it would open. I remembered the old Anthony’s Restaurant and regretted what this historical landmark and beautiful view would become until I saw that they were building a dome here.

Since I met Buckminster Fuller when I was in college, more decades ago than I care to say, and as an experiment, I even lived in a plastic dome in the Santa Cruz mountains that are on fire now, to the chagrin of my late father who spent the night with me there, I was thrilled! The plan was for a few domes that became upscale restaurants, right near the ancient Star of India.

It finally opened, even during Covid 19, so we decided to drive down there. As you can see, it looks fantastically futuristic! They now call it Portside Pier. At the time, we got an easy waterfront parking space and there was no line to get in to Ketch so we walked right in. and I ordered the delicious Coctel DeMar, an incredible ceviche, with crab,shrimp, avocado,salsa, cilantro, etc. as seen on the left in the picture below. It’s supposed to be an appetizer but it was large enough to be a main course. The beer was good too.

Me in the Ketch Dome

I went back to the Portside Pier a few weeks later on a Saturday night. The word has gotten out about the place now so it was a little harder to park but I still found a free spot right in front of the Star of India.  We got up to the restaurants and asked for a table at Miguel’s. The pretty hostess said it would be a 2 hour wait. We went back to Ketch and they said the same thing so we wandered around outside the building and inside where we saw some amazing sign art and a restroom, something that was needed on the Pier. My date was clever. She wandered upstairs to the top of Ketch, sat down at a table they said was reserved, and first asked for just a glass of water. Then when we were sitting down, she got a waiter to give us menus. I was ambivalent about the fairness of this because some people were waiting in line for a few hours, and I mentioned it to her, but I finally gave in and ordered. The menu upstairs where we were sitting was very different than what you can order downstairs in the dome. Downstairs they have great seafood. Upstairs you can only get bar food like sandwiches or just fried foods. Downstairs closed at 9pm so we had to eat upstairs. I had the blue fin tuna sandwich. I would say it’s very salty and just Okay. We each had a drink and the total for bar food and drinks was around $50.00. Certainly not a bargain, but incredible scenery! Besides, what do you expect from San Diego’s newest Saturday night hotspot? 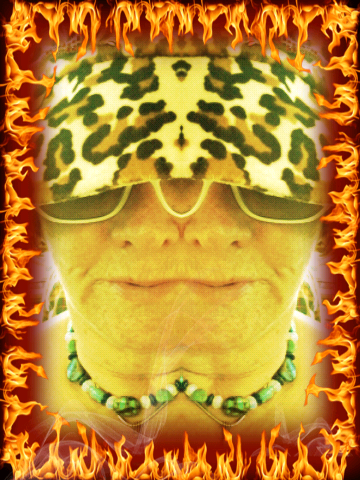 I took this picture of a friend, doubled it, set it on fire using the free version of Instafusion for Android, from the Play Store.